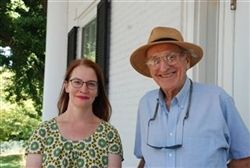 Tandem School was founded in 1970 by John Howard and Duncan Alling, two men with wide experience as teachers and administrators in large, independent boarding schools. Both were familiar with the Charlottesville area, and felt there was a need for a school in the community which would present an alternative approach to education. Their philosophy was, in part, based on the conviction that the processes of maturation and academic development need an environment in which there is a close and trusting relationship between faculty and the students, a free examination of values and ideas, and an approach to decision making which involves the whole school community. The founders also envisioned a school dedicated to an economically and racially diverse student body, and a curriculum embracing the arts, environmental stewardship and community service, in addition to academic rigor.

Though founded in 1970, shortly after segregation academies proliferated throughout the state of Virginia, Tandem School was from its outset an inclusive school; the intention of the schools’ founders was to provide a racially integrated, economically diverse, and co-educational private school option. In addition to providing rigorous academics, the school from its founding embraced the arts, environmental stewardship, and community service. A Board of Trustees was asked to serve, and the school was chartered as a non-profit corporation before its opening in September of 1970.


Initially, the school was located in a two-story brick house on the banks of the Rivanna River (see the drawing in the banner above, done by a former art teacher). In 1972, the school moved to "Hillcrest," a large home dating from the mid-19th century, located on 23 acres of land (now at 31 acres). This site provided adequate classroom, laboratory, and athletic space for approximately 85 students in grades 9-12. Tandem proudly opened its doors as the first area independent school that was both integrated and coeducational.


In 1983, Tandem School opened a Middle School serving grades 5-8, and was accredited by the Virginia Association of Independent Schools. From 1982 to 1995, the school's enrollment grew from approximately 90 to 130 students, and new programs were added in community service, physical education, music, and drama.


In 1995, Tandem School became the first school to formally adopt the philosophy and practices of Quaker education, renamed itself Tandem Friends School, and became a member of the Friends Council on Education. An ambitious physical plant expansion was also undertaken, which resulted in three new buildings: the Community Hall, Gym/Field House, and Math/Science Building. From 1995 to 2004, enrollment at Tandem Friends School steadily increased to its optimum total of 240 students.

In 2021, a new Pavilion construction project was begun behind the Community Hall. The completed Pavilion will serve as a multi-purpose meeting and dining space.